Zemuria (ゼムリア大陸, Zemuria tairiku), also render Zemlya, is the continent in which the Trails series takes place, following a fictional timeline called the Septian Calendar. According to overall history of the Trails universe, all the stories where the Trails games takes place spans up to nearly 3 years. The transcription Zemlya is used by the official developers of the series, Falcom Corporation.

Over 1200 years ago, the Zemurian continent was once inhabited by an advanced civilization, the Sept-Terrion. Prior to the series around 50 years ago after the Orbal Revolution (導力革命, Dōryoku Kakumei) and Technical Revolution (技術革命, Gijutsu Kakumei), the Trails universe utilizes the innovational Orbal energy as the infrastructure to all functional needs to the community.

Liberl is located on its west side, where the series has slowly begun to unravel the rest of the continent starting from West Zemuria. As of the latest game in the series, a full geography map of the continent and worlds beyond has yet to be revealed.

Zemuria is made up of numerous countries, kingdoms and independent states which include: 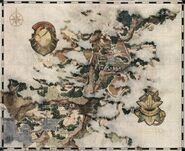