Nihon Falcom Corporation (日本ファルコム株式会社, Nihon Falcom Kabushiki Kaisha) is a Japanese video game company. Founded in March 1981 by Masayuki Kato, Falcom has played a definite role in the growth and development of the Japanese personal computer software industry. The company released the first Japanese computer role-playing game in 1983 and followed with real-time action and adventure games as well as games with fully developed soundtracks.

Their flagship titles include the Dragon Slayer, The Legend of Heroes and Ys series. While most of Falcom's games have been ported to various video game consoles of all generations, they have only developed a few non-PC video games themselves. 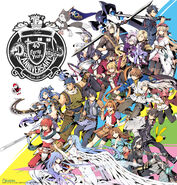