Garrelia Fortress was a bordering military installation of Erebonian Empire located in the easternmost outskirts of the country. It borders the empire from the west by the former Crossbell State.

The Garrelia Fortress is one of the biggest and largest military fortress of Erebonia that is in par with the Dreknor Fortress in the Sutherland Province. The fortress' chief in command is Lieutenant General Walter and the home base of the 5th Armored Division until its destruction on October s. 1204.

On the months of the October Campaign, Garrelia Fortress's Proving Ground was used by the 4th Armored Division, the RMP, and remnants of the 5th Division as their primary base opposing the Kreuzen Provincial Army on Twin Dragons Bridge at west.

Garrelia is considered as the powerful gateway of the empire to the eastern Zemurian States due to its high technological advancement purged from Erebonia's tax. It is also equipped with two powerful Railway Gunnery constructed by the Reinford Group and the weapon's output can be treated as a weapon of mass destruction pointed permanently towards the east but ultimately to the Crossbell City and beyond. It is bunker are large enough to house several Achtzen Tanks and Orbal Planes. Other than that, the fortress is the only passageway of the eastern Transcontinental Railway Network heading to Crossbell and Calvard Republic.

Day 4 of Rean's field studies, and 2nd day at the fortress - Around 15:30 hrs...upon hearing the terrorist invasion in Crossbell, Rean and gang would also be bombarded with the Liberation Front back at the fortress.

Groups A and B head to the different cannons. There, they confront S and V. Class VII is successfull in preventing a mass attack on Crossbell. Unfortunately, C's gang escapes 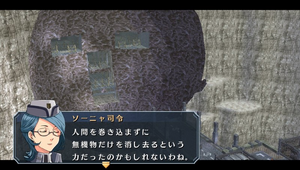 Several months after the ILF's attack on the fortress the orbal cannons installed there are removed.